Время публикации : 2018-09-18 ATMEL industrial control
This solution is based on the power tool developed by ATMEGA328P-AU. It has functions such as gear setting, overcurrent, overheat protection and working status indication.

The overview of solution

This solution is based on the power tool developed by ATMEGA328P-AU.

It has functions such as gear setting, overcurrent, overheat protection and working status indication.

The program can be modified to apply to power tools of different powers.

Special features of the microcontroller 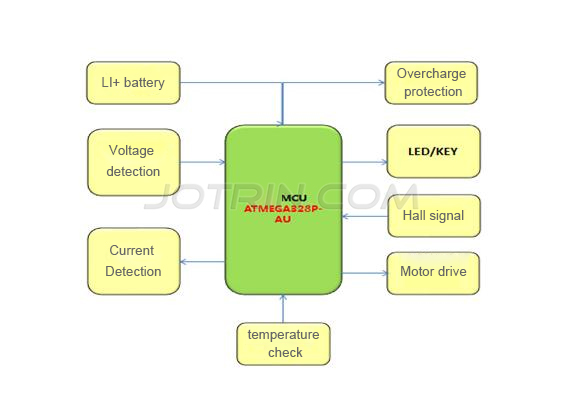 The principle of power tools
Motors can be divided into DC motors and AC motors due to different input currents:

(1) DC motor - A motor that rotates with a direct current is called a DC motor. Because the magnetic field circuit and the armature circuit are connected in different ways,

(2) AC motor - an induction motor in an AC motor, whose powerful induced current (eddy current) is generated in a rotating magnetic field,

and the copper rod on the rotor continuously cuts the magnetic lines of force, according to the law of the second, the induced current has a resistance magnetic field.

a, rectification motor - make the series-excited DC generator, used as an AC motor, that is such a motor, because the alternating current in the magnetic field and the armature circuit, while turning, so the direction of the force moment remains constant, the machine is Rotate constantly.

Such a motor is also called a "universal motor" because it can also use AC and DC. Such motors are often used in vacuum cleaners, sewing machines, and other household appliances.

The rotating magnetic field is not caused by mechanical methods.

Instead, it is connected to several pairs of electromagnets by alternating current, so that the magnetic properties of the magnetic poles change cyclically, which can be regarded as a rotating magnetic field.

Three-phase induction motors (with three pairs of magnetic poles) are often used. The movement of the DC motor is exactly the opposite of that of a DC generator.

In the generator, the induced current is formed by the induced electromotive force, so they are in the same direction.

c. Synchronous motor—The motor that rotates from one pole to the next, just the same cycle as the current.

Such a motor cannot be started by itself, and an alternating current must be connected after another motor or special auxiliary winding has been used to reach an appropriate frequency.

If the load changes and the speed changes, the speed is not consistent with the frequency of the alternating current, so that the pace is disordered, tending to stop or cause damage.

Due to the limitations, the application is not extensive.