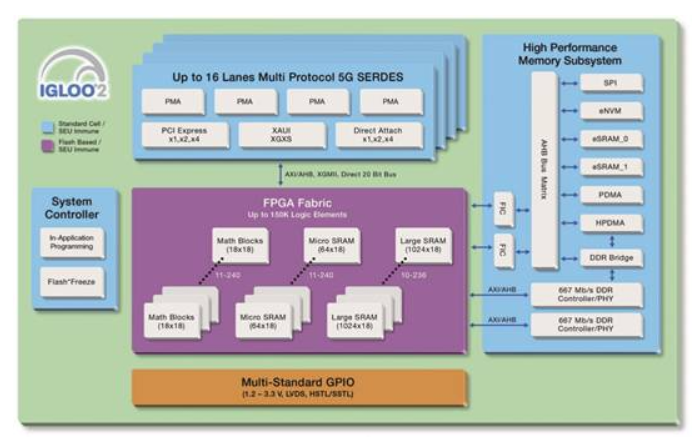 -Up to 2 high-speed DDRX memory controllers

-Up to 512KB of embedded non-volatile memory (eNVM)

• Working voltage and I / O

-NVM integrity check (power on and on demand)

• Can reduce total power consumption by 25%

The IGLOO2 Field Programmable Gate Array (FPGA) Evaluation Kit (M2GL-EVAL-KIT) is RoHS compliant and enables designers to develop one or more of the following applications:

• High-speed serial I / O applications, such as PCIe,

Microsemi IGLOO2 Evaluation Kit is a low-cost FPGA platform for developing cost-optimized FPGA designs (using Microsemi's IGLOO2 FPGA), which provides first-class functional integration, and lowest power consumption, highest reliability, and most advanced security Sex. With this IGLOO2 evaluation kit, it is easy to develop transceiver (I / O based) FPGA designs to build PCI Express and Gigabit Ethernet based systems. The motherboard is compatible with the small form factor of PCIe, so any desktop computer or laptop (with a PCIe slot) can be used to quickly build evaluation prototypes.

The board includes an RJ45 interface to connect 10/100/1000 Ethernet, 512MB of LPDDR, 64MB SPI flash, USB-UART, and I2C, SPI and GPIO headers. The kit includes a 12V power supply, but can also be powered through a PCIe edge connector. It also includes a free gold license for the Libero SoC software toolset to facilitate FPGA development and use the reference designs provided by the kit. Also included is a FlashPro4 JTAG programmer for programming and debugging.